I’m Nobody, Who Are You?

Thank you to Basiliscus Film for their support filming and editing the trailer. 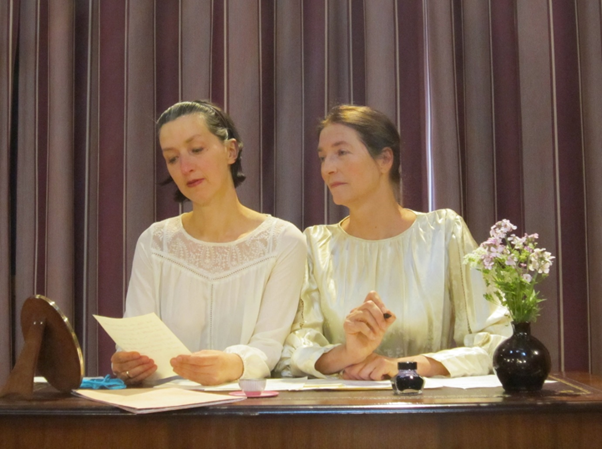 A singer and an actress slip into the role of Emily Dickinson, creating one person. Spoken word intermingles with sung, short poems. Telling parts of Emily Dickinson’s life; her relationship to her father, her longing to have her poems published, and her struggle to find recognition. A woman too clever for her century, living an unusual life.

A staged programme inspired by the play “The Belle of Amherst” by William Luce and Dickinson poems set by different American composers such as Aaron Copland, Arthur Farwell, Lori Laitman and the Nick Benavides song cycle “Pain has an element of blank”.

“I thoroughly enjoyed the Emily Dickinson Recital – the imaginative interaction between song, poetry and prose held our interest for the whole programme.  Everything was beautifully sung and acted.” (Tim, audience)

Stephanie Schmiderer hails from Vienna where she has worked in classical and avant-garde theatre. Her stage credits include: Ines in Sartre’s ‚No Exit‘; Jean Cocteau’s The Human Voice; Dorothy in Priestley’s ‚They came to a City‘; Emma in Pinter’s ‚Betrayal‘; Angustias in Lorca’s ‚House of Bernarda Alba‘, and classics such as Goneril (King Lear/Shakespeare), Arkadina (The Seagull/Chekhov), or the High Priestess in Kleist‘s ‘Penthesilea‘. She has also appeared in three solo pieces ‚Kein Mond, Kein Taxi‘, ‚Der Nackte Schubert‘, both original works premiered in Vienna; in New York she originated the role of Virginia Woolf in ‚If my Memories were Yours‘.

Film and TV credits include features such as Rigodon, Kill by Inches, Daughter of Arabia/Si Laraby, The Strange Case of Wilhlem Reich, Woman in Gold, Ein Sicherer Ort, Soko Kitzbühel.

She also works as simulated patient at the Medical University of Vienna, the Karl Landsteiner Private University in Krems, and at Memorial Sloan-Kettering Cancer Center in New York City.

In addition she holds a Ph.D. in cultural anthropology with focus on dance, performance and religion.

Ute Lepetit-Clare (German Mezzo-soprano), is based in Cambridge, and her recent concerts include Petite Messe Solennelle, St. John’s passion, Messiah, and Nelson mass. She has also given lots of recitals mostly with songs from German composers at Gonville and Caius College (for New Europe Society), Hughes Hall College, Clare Hall College, and Jesus College. In 2015 she sang the role of Rupert Brooke’s mother in the world premiere of the opera “Strange Ghost” by David Earl in Cambridge.

Ute studied at the University of Music and Theatre, Leipzig and at the Liszt School of Music Weimar. During her studies she performed numerous roles at Schauspielhaus Leipzig, Hebbel Theater Berlin, Sorbischen Volkstheater Bautzen, and Theater Görlitz. She was engaged as soloist at Theater Eisenach and at Saxony Theatre, Dresden. She has also performed as guest soloist, including at the Rheinsberger Musikfestspiele, and the Wernigeroder Schlossfestspiele. Ute has performed more than 40 roles, which include many of the main Mezzo-soprano roles such as Cherubino, Dorabella, Muse/Niklaus, Hänsel, Rosina, and Olga. Alongside her work in opera, Ute has also performed many concerts in some of Germany’s most important venues, including in Gewandhaus Leipzig and Frauenkirche Dresden.

Marie-Noëlle Kendall based in Cambridge, is in much demand as a pianist, both as soloist and chamber musician. She has played concertos with leading British orchestras including the Philharmonia and BBC Scottish, in major venues and also recorded for BBC Radio and Television. Her career has also taken her overseas with a particular connection to Australia where she has performed on many occasions and recorded two chamber music CDs.

Last season has included premieres of works by Robin Holloway and the release of a CD with Alastair Miles to great critical acclaim in publications including Gramophone, BBC Music Magazine and American Record Guide. Marie-Noëlle and Alastair also performed live on Radio 3. Recent concerts in the Cambridge area include a two-piano concert at West Rd Concert Hall with Patrick Hemmerlé, and solo recitals.